It Has Been an Eventful Week To Say The Least!

We have had a great week!

We had the chance to celebrate Edwin's grades, and take him out for a day of food and fun!

While we were there, Ezekiel accidentally locked both sets of keys in the car which made for a very eventful afternoon.

Here we are standing in the parking lot, and EVERYONE decided to come over to help us out.

2 hours and we finally made it into the car.

We had everyone from security guards, to store managers, to police, and military trying to unlock our car.

Finally a lady was there who said she knew a guy that would be able to do it, and she called him, and he was in within 15 minutes! Thank you Jesus!!

It is getting a little closer to elections and the tensions are high. This morning we were able to hear some machine guns firing in the distance, which was unsettling, but God has his hand on us, and we are all okay.

On Sunday we went to Jordan Church and ordained the Pastor and our Home Missions Director John Konam.

God is moving, and great things are happening in PNG! 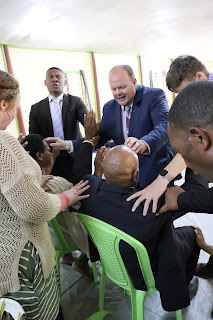 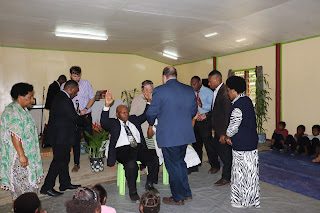 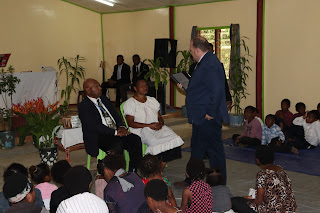 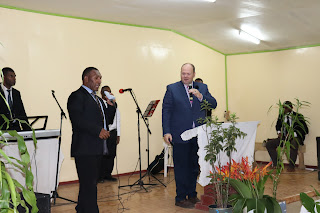 May God Continually Bless You,

We have been talking about building.

We have been talking about buying material.

We have been to the get the quotes, and as you can hear in this weeks podcast the assembling has begun! 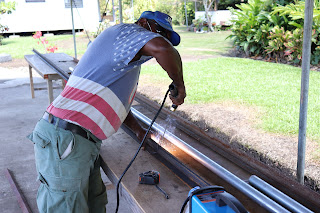 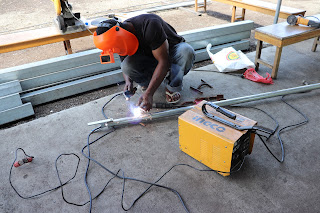 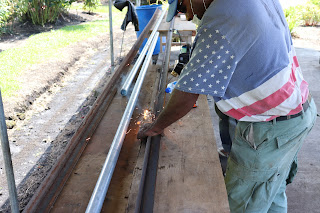 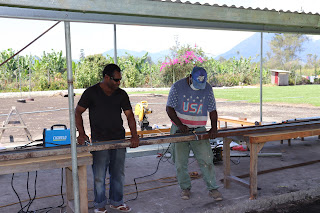 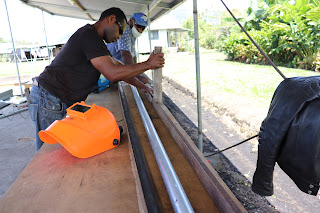 We have 8,000 Square feet of a new building to construct!

Several have committed to coming out to help, and Ezekiel learned how to weld today!

Great things are happening, but as a dear friend of mine always says, "greater days ahead"!

Thank you for your prayers and support,

Stones, and Bullets Flew, But We Made it Through!

I am so thankful we have people praying for us!

We had a pretty crazy trip to Lae this week. We are just making it back to Hagen after spending 3 days in Lae for a service with Pastor Philip Kaman.

Our trip down was great, we left the headquarters around 4 am, and picked Daniel Parak up in Ku around 6. We made better time than we ever had to Lae, and then we came to a HUGE roadblock.

They had two coaster buses which are about the size of a school bus parked sideways in the road, and they were not letting anyone through.

We set there for what seemed like days, and as time went on I was able to work my way all the way to the front of the line, hoping to get to our hotel soon. We had been on the road for about 13 hours at this point, 2 of which we were setting in this line of cars.

I finally was able to get out of the car and talk to someone who casually told me that we had no reason to worry they would be moving soon. I stood there and talked to him for a few minutes, and then several vehicles came rushing in behind me. As they were getting out I noticed it was PNG Defense Force, and as they marched out of the vehicles, they were all holding guns.

As soon as I saw what was happening I rushed back to the car, and they began to do what they do. After about 15 seconds of them being there they began to clear out the debris between them and the buses.

That is when we saw it... Rain, not water, but a rain of stones began coming down over the buses, and I was right there in the line of fire. As is saw them coming I quickly pulled a u turns and drove back. We were hit by one stone, but there was no damage.

As we were driving away we began to hear several 3 shot burst from the machine guns of the military, and we got to a place where a dump truck, and several other vehicles boxed us in for our safety.

After about 5 minutes of fighting the road was cleared, and about 5 minutes after that we were given the green light to go through. Thankfully we had an escort take us from behind the dumptruck to our hotel. We drove behind a truck, and also had a truck behind us. We were within the first 5 vehicles out of the area, and in safety.

We are so thankful for God's hand of protection!

While we were in Lae we had a great Service, baptizing 1 in the name of Jesus Christ, and we also got to marry bro Michael, and Sis Ronia! 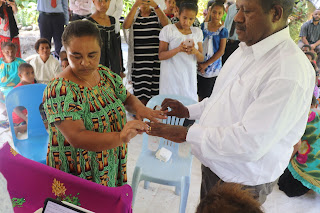 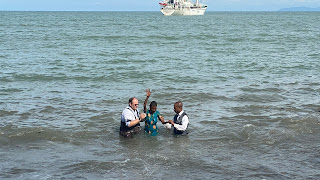 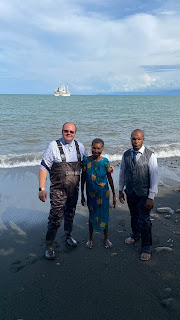 God had big plans for this weekend, and the enemy tried his best to stop it...
BUT GOD!!
We also had the opportunity to meet with Bishop Unba Nuruwa from Ramu, and start the planning of a MOMASSE Conference, and meet with a Pastor who was formerly licensed with the ALJC who has requested to reapply in September!
Revival!!!
Thank you for your continued prayers and support,
Bro Marshall

Today is an exciting day!

I haven't put anything on media, and have not shared anything with anyone except my superiors, family, and those coming who we have attending our 2022 National Conference here in PNG!

Last week we had our quarterly National Board meeting here at the headquarters, and I was able to announce the lineup for the 2022 National Conference! 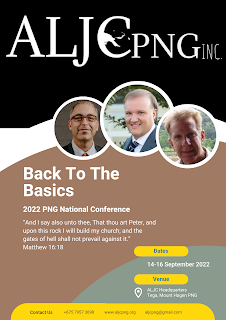 In Attendance we have

We are excited to see what God is going to do this year!

After the announcement we all went to the church area in the back, and prayed over the land where we will be building the Bible college.

We also have 2 possible attendees from right here in the South Pacific. Our 2 missionaries from the Solomon Islands, and Fiji, George Sio (SI) and Setoki Tuberi (Fiji). Everything is dependent on Covid travel restrictions.

I also have some exciting news as to another National Conference that will be happening in the South Pacific that my family will have the privilege to be at.

In June of 2022 we are headed to Suva Fiji to teach, and minister at the Fiji National Conference!

We are growing, and going here in our region, and are so thankful to have you praying for us daily, and supporting us monthly to make things like this happen.

God is so good!

Be sure to check out my podcast "Coffee With The Missionary", it is available on all platforms.

The Roller Coaster of Life, And a Story of Faith

The building process is moving along!
Our Bible College is being started, and we are excited to see what God has in the future!
As many know we tore down our old conference center in May of 2021, and just trusted God that he would make a way for our new Bible College.
Well...
We have started clearing out the land, and purchasing the materials, and I am excited to announce that we will be Lord Willing having our 2022 National Conference under the new bible college roof!
During our Deputation we will really be pushing to raise the funds for the completion of the Bible college, but should have the framework, and the roof completed before the beginning of September!
A Story of Faith
In 1994 the Price family came to PNG to start a Bible College, and there were many obstacles. They started doing some training, and teaching, but the college was just something that was not able to be started, or built. In 2001 the Barnett family came to PNG to carry on the flame, and a bible college was planned, but the same things happened. While the Barnett's were in PNG the headquarters property was moved to Tega, which is where it is now. The original plan for this property included a bible college, but the Barnett's were only on the property for roughly 5 years. When we moved here in 2019 there was a lot going on, and as time went by the training center we had just became way too much of a risk to have, so we had a crew come in and tear it down in an act of faith. Now in 2022 we have more vision than ever to have a bible college in PNG, and we are excited to announce the process has started!
Now on to the question of the day...
As a missionary what is one of your biggest obstacles?
IMMIGRATION!!!!
I found out this week that Ezekiel's visa expires on his 18th birthday.
Everyone else's expires in September, so we all just assumed everyone's expired together. We Were Wrong...
Now We are going to try to fill out an extension through PNG Immigrations to have his visa extended for 90 days so we can keep him here in PNG until we all come back together. the tickets for September have already been purchased, and are non refundable, so we are praying to find favor with Immigrations here in PNG, and that Ezekiel will be able to stay.
Please continue to pray about this matter!
Check out my weekly podcast for more up to date info, and to hear what God is doing in the South Pacific!
God Bless,
Bro Marshall
Posted by Ryan D Marshall on May 02, 2022 No comments:
Email ThisBlogThis!Share to TwitterShare to FacebookShare to Pinterest
Labels: ALJC, Apostolic, Bible College, blessed, Coming up, Dream, Future, Growth, Papua New Guinea, South Pacific, Vision
Newer Posts Older Posts Home
Subscribe to: Posts (Atom)