This week we are going to be talking about the things that have happened here in PNG over the past week. We have had a pretty interesting few days, and have been able to go through our container contents to sort, and put everything away.

As you know last week Me and Pastor Charlie drove to Goroka to pick up a container that we shipped from America. The container shipped in late February, and was supposed to arrive mid June.

Well... We got it in Mid January! At least it was a month that started with J?

A couple of Weeks ago we received a package that some people from our home church mailed out in July. We got it late December.

In the shipment they sent from New Castle we had

We also had the following in our container,

When we made it to Unkarumpa where our container was they had an "American" Store. It just like everything else wasn't too stocked due to covid, but I did find Right Guard deodorant, Febreeze, Kool Aid, Flavor Aid, and a few other small things.

I made some kool aid last night, and let me tell you, it is the best thing I have had to drink in months!

It is those small tastes of home that really helps along the way! If anyone would like to send us some tasty treats you can send them to:

There is nothing like some good candy for a morale boost!

Speaking of mail we have started receiving a few things...

2 Days ago I stopped by our local post office, and we received the July issue of the "Apostolic Witness" magazine. It was January 24!

The good thing is mail is starting to move again which is refreshing! We had gone almost 2 months with nothing coming in, and now slowly but surely it is starting to trickle in!

This week Ezekiel, me, Joseph, and Daniel are planning on hiking the largest mountain in the Southern Hemisphere! We are making the trek up Mount Wilhelm later this week, and I am going to try to record next week's episode from there.

The young man that they had pronounced dead at the tribal fight is doing better! We were able to get him in the truck, pray, and get him to the doctor. The doctor found a faint heart beat, and was able to get him stable. He lost a lot of blood, and has a concussion. He is still being held until he recovers, so continue to pray for him!

We had a great trip to Simbu where we were able to install the regional board that was elected in late December. We have 7 new positions in Simbu. We were also able to install a new assistant pastor at Nunuma Church to help Pastor Lapun with the work there.

We are growing, and with that comes much growing pains. Please continue to pray for us, and thank you for your continued prayers and support!

As Always Be Continually Blessed,

First off on behalf of my family, and all of us living on the compound I would like to say "Thank You".

As many know last Saturday we had a tribal fight that broke out just over 100 yards from our property here in Mount Hagen.

Many commented, prayed, and sent messages, and for that we are truly thankful!

The reason this episode was entitled "The 8,000 Mile Prayer" is because everyone who commented, and messaged was 8,000 or more miles away.

God is omnipresent, and no matter where we are when we call on him, he will answer!

On the other side of that token I also had a few ask me, "why do you stay?" or "why would you put yourself in harms way?"

The answer is God called us to PNG for a reason, and they need to hear the gospel of Jesus Christ!

I have been a lot of places, and I can say when God calls you somewhere there is such a peace that sets upon you that you just know that He has your back.

On the live stream I mentioned that a young man was killed, and everyone that was there thought he was dead after being hit in the back of the neck with a machete. He was an innocent bystander that wasn't even in either tribe that was fighting. They thought he was dead, and I am not so sure they were wrong, but God had another plan.

After the fighting had stopped they went to him, and he was alive! They came straight to the property for help, and we were able to pick him up, pray, and get him to the hospital for help.

They are going to let us know when he is released! God is so good!

On Sunday morning we went to church at RedKona Church in Mount Hagen to hear Willie Charlie preach his first Sunday Morning message!

This young man tore it up! He preached on "Rebuilding The Altar" and it was a conference quality message! Did I mention it was his first one?!!

After he preached the altar was full, and there were 2 that repented of their sins for the first time, 3 were baptized in the name of Jesus Christ, and 3 received the gift of the Holy Ghost!

Yesterday me and Pastor Charlie took a trip to Unkarumpa in the Eastern Highlands province to pick up our long awaited container pick up! We shipped a partial container in February of 2021, and it was supposed to be here by mid June. Well mid June ended up being mid January, but hey its here!

Today Sister Marshall has been going through everything to put up, give away, and get ready! We had stuff for us, stuff for others, decorations, bible studies, and a ton of school supplies for the kids!

On our way back we were driving in Simbu, and it was so foggy you could not see 3 feet. I told Pastor Charlie it was like driving through a glass of milk it was so foggy. I saw a large pothole, that was in a place where I was thinking was a sinkhole, then I saw a man jump over it into the road. To avoid hitting the pothole or the man I swerved, and when I did I heard "STOP" The passenger side tire was hovering over a steep embankment and we were inches from falling into this ravine.

We prayed before we left the house, and before we left Unkarumpa, and God heard that cry. The many that jumped out helped us by putting rocks in front of our tire so we wouldn't go into the ravine, and he and Charlie helped guide me back to a safe place.

Needless to say we took it very slow the rest of the way until we got to the place where most of the fog had lifted.

I just want to thank each and every one of you for your continued prayers and support. I say it all the time, and will continue to say it, "the #1 thing our missionaries need is prayer" and I will stand by it!

Please go to the podcast and give us 5 stars, and review the show, it would really mean a lot!

Happy New Year everyone!
We pray 2022 is blessed and prosperous for all all you!
We closed the chapter of 2021, and opened a brand new chapter with 2022!
On December 30th we had our annual Christmas celebration with everyone that lives here on the compound, and with 2 of our students!
We had a great time having a MuMu and celebrating!
December 30 is also my birthday, and I told everyone that we weren’t planning anything for my birthday, but we wanted to focus on spending time together, and celebrating Christmas, but…
THEY DIDNT LISTEN.
Before we started they all began to give me birthday gifts, and wishing me a happy birthday! It was very nice of them to think of me on this day.
We had a great time together! We stared with the Charlie family, and our “secret person” reveal! We had been buying gifts for one another for the entire month of December, and now it was time to find out who was who!
We followed that with having our MuMu! Ezekiel had a pig we were able to buy for a reasonable price, and we had a great MuMu that started at 5:00 am, and cooked until after 1:00 pm due to a haus krai we had from 11:00 to 1:00. 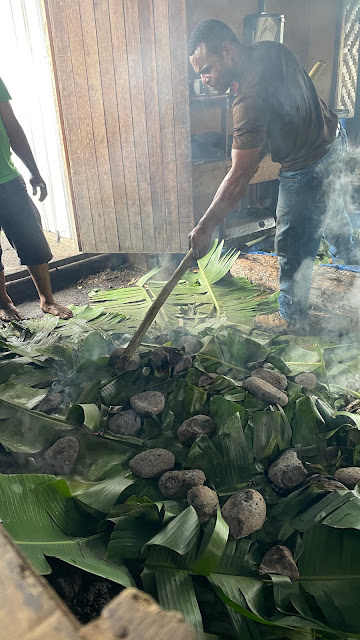 A MuMu is something we do here in PNG for a celebration. When you have a mumu it means that what you are doing is very important.
Here is a mumu breakdown,
1. Kill the pig
2. cook the stones for about 1 hour to make sure they are red hot
3. while cooking the stones dig a hole, and line it with banana leaves
4. line the bottom of the hole with red hot stones
5. cover the stones with more banana leaves
6. put in all vegetables (kau kau, greens, tapioca, etc...)
7. while putting in the vegetables season the pig
8. Put the pig on top of all the vegetables
9. cover in banana leaves, and let steam for the next 4 - 5 hours.
10. Eat some of the best food you have ever had!
Anyone who has ever enjoyed a mumu knows that this is some great food! If you're planning a visit to PNG hopefully you get the chance to experience this great feast!
Following the mumu dinner we played the Saran Wrap game with everyone here, and it was so much fun! We had several gifts wrapped, and the main gift in the middle was a stone that had k50 written on it. Whoever got to the middle got a 50 Kina bill! It just so happened that Adrianna was the one who found out what the main prize was. 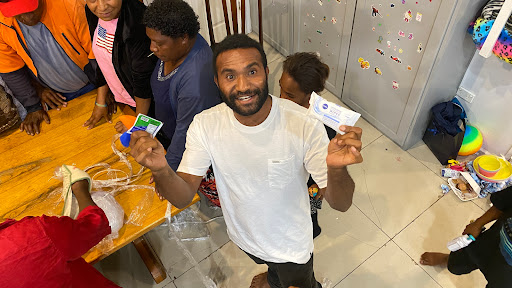 After we played the game the kids sang "Jingle Bells for everyone, which is a song that Ezekiel, and Joseph had worked on with them for the past couple of weeks during school, and one time during Christmas break for the kids.
I then read the Christmas story to everyone, and explained we do not believe Jesus was born on December 25, but we do believe in celebrating his birth, and being a light that shines in a world of darkness. 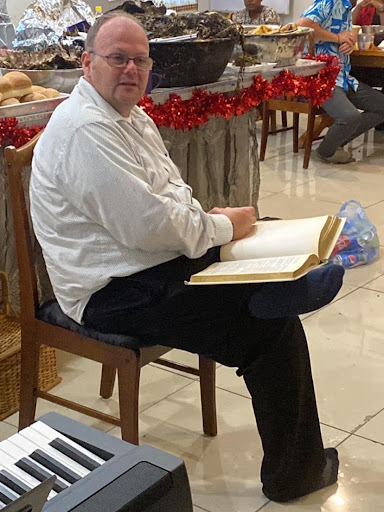 We enjoyed the rest of our evening opening gifts, drinking coffee, and telling stories. We ended the evening with a white elephant game. The hottest gift was a water bottle... that just so happened to have 52 Kina inside. Everyone wanted the water bottle, well maybe not the water bottle, but the non liquid content.
On New Years Eve our family spent time together, and had a great time of prayer and communion to bring in 2022 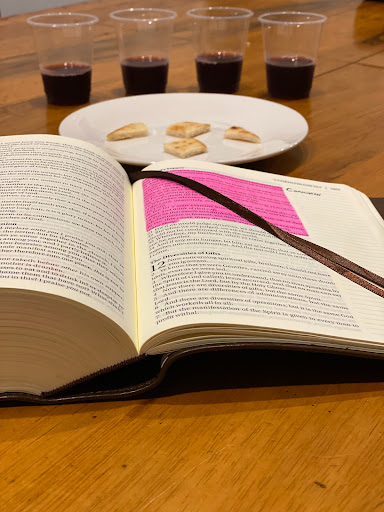 The first Sunday of 2022 was wonderful! Here in the Western Highlands we had 4 baptisms with one being Pastor Charlie's Daughter Amyee, there were also 3 other people from RedKona Church! On Facebook that evening Andrew Yani posted that he also had 2 baptisms on the same day! That is 6 reported baptisms for only 2 of our 36 churches to bring in 2022! We are praying for a great harvest in 2022!

As always Stay Blessed! Happy New Year, and we will talk to you soon!
Brother Marshall